On Austerity For Nations VS Households

The following is an excellent explanation on austerity which may help some people understand what's going on.

History Of The GOP, The Dufflepuds & The Depth Of The State Of Denial


"Have not the parties of the Left as well as those of the Right been deceived by believing that the National Socialist Party was in the service of the capitalists and opposed to all forms of socialism?" The Road To Serfdom  by F. A. Hayek (Page 6)

What are dufflepuds? Answer = https://www.facebook.com/video/video.php?v=1444456241861 YouTube Clip http://www.youtube.com/watch?v=Mh1L7Nk4X8Y (i.e. C.S.Lewis was the first to notice this and gets all the credit, also, not all dufflepuds have this general shape, though most seem to... and ALL have 2 legs.)

They wanted downward adjustments in everything but war spending... AND STILL DO! (i.e. part of what Ron Paul calls 'militarism').

When trying to convince people not to do a Stimulus... this was the argument put forward by the Republican National Committee and Fox News i.e. spending leads to a depression... but that's not the best part, the best part is that they were arguing that SPENDING ON WAR (NOT ON PEACEFUL ACTIVITIES) leads to recovery (people seem to have forgotten about that crazy "debate"!)

Explanation: That spending is good for an economy shouldn't be debatable. If you have a business and nobody buys your stuff (i.e. if no spending occurs) you will make no money. This is basic economics, even George Bush wanted people to spend to boost the economy, he just wanted it to be ALL on consumer spending while the Government focuses it's spending on war in Afghanistan and Iraq. The debate should be instead on WHAT FORM OF SPENDING SHOULD BE CARRIED OUT. I support peaceful spending activities (done properly, transparently and efficiently), while the GOP and the Paul Ryan Plan goes the other way.


What happened before that...

The housing bubble was created by the FED and Bush, which led to the largest job loss in history UNDER GEORGE BUSH'S WATCH... Obama has almost got us back to where we were before Bush and his Wrecking Crew, i.e. ... 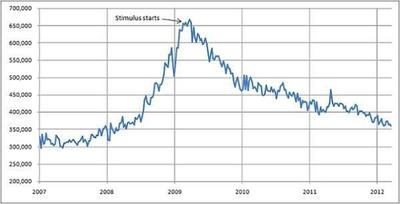 Image Source: Geeky chart from Steve Benen -- new jobless claims still at four-year low, even with upward revisions
(Note that the 4 year low is referring to 2008... when Bush was in charge)

As for why jobs haven't come back in full from the largest job loss in history under Bush's watch... can be explained by JUST one Federal Policy which was SPED UP under Bush's Watch (i.re. off-shoring/outsourcing)..."You have told the American people that you support a trade policy which is selling them out." ---Rep. Bernard Sanders to Federal Reserve Chairman Alan Greenspan on 7/16/03... (On sending PRIVATE SECTOR JOBS OUT OF THE US)

What are the Dufflepuds talking about?

A summary of perspectives on "Socialism" in the GOP/Fox-News-Network...

"Have not the parties of the Left as well as those of the Right been deceived by believing that the National Socialist Party was in the service of the capitalists and opposed to all forms of socialism?" The Road To Serfdom - Page 6

Summary of "Socialism", Keynesian Economics & "Road to Serfdom" (by F.A.Hayek) 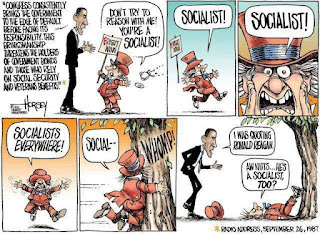 The average GOP Republican has the intelligence of the dufflepuds in Chronicles of Narnia part 3... except they use the word "oppressor" not "socialist".


"It cannot be denied that there is yet little recognition of the positive ideals for which we are fighting. We know that we are fighting for freedom to shape our life according to our own ideas. That is a great deal, but not enough. It is not enough to give us the firm beliefs which we need to resist an enemy who uses propaganda as one of his main weapons not only in the most blatant but also in the most subtle forms." The Road To Serfdom - Page 5

1. Socialism by Robert Heilbroner (Article From Library of Economics): "Socialism—defined as a centrally planned economy in which the government controls all means of production" http://www.culturesocietyblog.com/2009/05/socialism-by-robert-heilbroner.html

3. Perspectives of the absurdity of the GOP's creation of Socialism from The Daily Show...


"This is a truth which most people were unwilling to see even when the similarities of many of the repellent features of the internal regimes in communist Russia and national-socialist Germany were widely recognised. As a result, many who think themselves infinitely superior to the aberrations of Nazism and sincerely hate all its manifestations, work at the same time for ideals whose realisation would lead straight to the abhorred tyranny." The Road To Serfdom - Page 4


Two: On Ronald Reagan (This part proves that the GOP-Conservatives are composed mainly of Dufflepuds, beyond a shadow of a doubt, for most people.)...

1. Introductory Video 1 - Moment of Zen - Ronald Reagan supports unions and collective bargaining in a speech from the 80s. (00:09) = http://www.thedailyshow.com/watch/thu-march-10-2011/moment-of-zen---ronald-reagan-supports-unions

3. The relationship between Republican governors and their states goes from cool new boyfriend to psychotic stepdad. http://www.thedailyshow.com/watch/thu-march-24-2011/gov-hurts

(Notice the elimination of social structure and jobs; By decreasing the social services available to lower incomes you have a break down of society at the social level of the lower to middle income class. This causes a great deal of stress on the economy and family structure of a country.)


The subtle change in meaning to which the word freedom was subjected in order that this argument should sound plausible is important. To the great apostles of political freedom the word had meant freedom from coercion, freedom from the arbitrary power of other men, release from the ties which left the individual no choice but obedience to the orders of a superior to whom he was attached. The new freedom promised, however, was to be freedom from necessity, release from the compulsion of the circumstances which inevitably limit the range of choice of all of us, although for some very much more than for others. Before man could be truly free, the "despotism of physical want" had to be broken, the "restraints of the economic system" relaxed.

Freedom in this sense is, of course, merely another name for power or wealth." The Road To Serfdom - Page 25-26


Three: On Fox News (Sources of disharmony for personal gain, all right-wing social problems, - including the Norway Killer -can be traced to Fox News... these are their principal actors)...

4. Glenn Beck agrees with the CIA... that Osama should attack America!!!! = http://www.thedailyshow.com/watch/wed-july-1-2009/osama-bin-laden-needs-to-attack-america

I would like to make it clear that Socialism is when ALL PRODUCTION IS HANDLED BY THE GOVERNMENT. Saving one industry because a bankruptcy with no private funding available would have destroyed the US auto-industry is admirable NOT "Socialism". This is just one more example of how the GOP and Fox News ARE waging a class warfare AND are LIKE a CULT of UNConstitutional Capitalists!


In other words, the new "conservatives" are actually Nazi type socialists using a propaganda network, very much like the Nazis, through corporations embedded in the Federal government to do basically what the Nazi's did. I know, History repeats itself. But this is crazy.

Proven: The Koch Brothers ARE Waging War On Obama & US Citizens!
http://www.culturesocietyblog.com/2012/10/the-koch-brothers-are-waging-war-on.html

"Because of the growing impatience with the slow advance of liberal policy, the just irritation with those who used liberal phraseology in defence of anti-social privileges, and the boundless ambition seemingly justified by the material improvements already achieved, it came to pass that toward the turn of the century the belief in the basic tenets of liberalism was more and more relinquished.

What had been achieved came to be regarded as a secure and imperishable possession, acquired once and for all. The eyes of the people became fixed on the new demands, the rapid satisfaction of which seemed to be barred by the adherence to the old principles. It became more and more widely accepted that further advance could not be expected along the old lines within the general framework which had made past progress possible, but only by a complete remodelling of society. It was no longer a question of adding to or improving the existing machinery, but of completely scrapping and replacing it." The Road To Serfdom - Page 19

IMPORTANT NOTE: The GOP is confusing people by taking half of thier ideas and implementing them to get consensus... knowing that setting up a stool on two legs is doomed to fall.


"It cannot be denied that there is yet little recognition of the positive ideals for which we are fighting. We know that we are fighting for freedom to shape our life according to our own ideas. That is a great deal, but not enough. It is not enough to give us the firm beliefs which we need to resist an enemy who uses propaganda as one of his main weapons not only in the most blatant but also in the most subtle forms." The Road To Serfdom - Page 5

"The attitude of the liberal towards society is like that of the gardener who tends a plant and in order to create the conditions most favourable to its growth must know as much as possible about its structure and the way it functions." The Road To Serfdom - Page 18

To take action without research makes you dumb... NOT patriots.

Abe
Hi! "I am death {shiva} . the destroyer of worlds".- Gita ... "When you have eliminated the impossible, whatever remains, however improbable, must be the truth" - Sherlock Holmes - Websites: Taoist Books and Instant Self Hypnosis