Sectors of the Economy and The Chain of Production

Every economy is divided into at least 4 sectors. The primary sector which includes basic production such as farming, mining or drilling. Then there is the secondary sector which includes all of manufacturing, such as making wheat into bread or steel into cars. Next is the tertiary sector which includes retail outlets and all services associated with getting the basic production, through its manufactured state to the consumer (these first three sectors are also the basic divisions in the chain of production from basic product to finished good to distribution). Next is sector 4 which involves government services such as libraries and roads. Then there is a fifth sector, or so its argued, of the very top elite of decision makers on the global and political scene which is supposed to constitute a separate sector of the economy. Since entrepreneurship is covered in the first 4 as are government services I will just be using the first 4 as the basic sectors of an economy. [Read about these classifications in full on About.com]

The first 3 sectors of an economy, the primary, secondary and tertiary; constitute the chain of production that all businesses are concerned with:


Primary sector Involves the extraction and production of raw materials, such as coal, wood and steel. A coal miner and a fisherman would be workers in the primary sector.


Secondary sector Involves the transformation of raw materials into goods e.g. manufacturing steel into cars. A builder and a dressmaker would be workers in the secondary sector.


Tertiary sector Involves the provision of services to consumers and businesses, such as cinema and banking. A shopkeeper and an accountant would be workers in the tertiary sector.


Goods move through a “chain of production”. The chain of production follows the construction of a good from its extraction as a raw material through to its final sale to the consumer. So a piece of wood is cut from a felled tree (primary sector), made into a table by a carpenter (secondary) and finally sold in a shop (tertiary).

It is important to note that any one business can own the farm, the factory and the retail outlets (or services) related to a particular product. In such a case the business is large enough to have itself firmly establish in the whole chain of production.

In this case study the whole process is outlined, which the image below (also from this site) condenses into a simple visual representation... 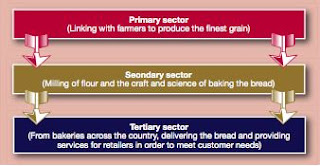 It is possible to move a business to another country in every sector of the chain of production. Both for companies specializing in any one part of a sector and for those businesses that cover all the sectors and are thus somewhat self-sufficient (such as large multi-national conglomerates). In these cases, the global picture of the forth sector provide the structure for the business to maximize profit and countries will generally adjust their policies concerning all three sectors of the economy, concerned with the chain of production,  to maximize their own economic growth (all other factors remaining  equal).

In a democratic society economic growth is theoretically supposed to be balanced with appropriate distribution and burden sharing for balanced democratic structures (such as education increasing intellectual capital) and social balance (such as keeping society fair for all its citizens).

Basic question and answers of how the chain of production works are here.
Posted by Abe at 11:55 AM

Abe
Hi! "I am death {shiva} . the destroyer of worlds".- Gita ... "When you have eliminated the impossible, whatever remains, however improbable, must be the truth" - Sherlock Holmes - Websites: Taoist Books and Instant Self Hypnosis